Angelfish is one of the most dazzling freshwater fish that you can keep in your aquarium. If you have thought about keeping freshwater Angelfish, make sure to do your research on how to properly set up your tank to accommodate their needs.

A Freshwater Angelfish can grow up to 6 inches long and their fins can grow up to 8 inches. Most of us will recognize them in our aquariums shaped as arrowheads with widebodies.

Colors are abundant for the typical Freshwater Angelfish such as Gold, Silver, Black, and Marbled. Thru the effort of aquarists worldwide, colors such as Gold, Koi, White or Albino, and Blue Angelfish can now be seen being sold in pet stores.

What is a Freshwater Angelfish?

A pretty fish known for the wing-like shape of their fins, it is considered one of the sought after fish by any hobbyist.

The Freshwater Angelfish belongs to the Cichlidae family and should not be confused with the Marine Angelfish.

It is one of the popular freshwater fish due to their appearance, ease of care and a good tank mate for other tropical tank fish.

Reaching maturity at around 10 months, Angelfish can live up to 10 years in a properly kept tanks.

If you have visited your local pet store, you might have probably seen this fish with a tall and pointed fin. Not only is it a beautiful fish but an easy one to breed as well.

Being a part of the Cichlid family, Freshwater Angelfish is a peaceful fish but may not live well with very small fishes. An aggressive eater, they tend to the top of the tank when they see you approach.

As a member of the Cichlid family, Freshwater Angelfish tends to quite aggressive. Quite territorial, who will form small schools to defend their positions. However, they are not likely to fight outside of heir school.

A school of Freshwater Angelfish is a wonderful sight. They can show off how coordinated they are when it comes to swimming patterns and foraging.

Generally peacefully, Angelfish can be aggressive especially during eating and can become territorial while breeding. 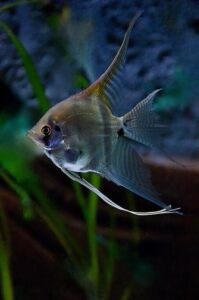 Freshwater Angelfish likes to digs a lot when it is foraging. Substrates in the tank should be soft and fine to prevent cuts and bruises.

If you have seen an Angelfish before, you might have seen it just flaunting its beautiful fins in an aquarium. They don’t do quite well in aquariums with a high flow setup, a simple hang-on filter or under gravel filter will work just fine.

Setting your tanks as a miniature swamp would be best to mirror their environment. Plants such as Amazon Sword Plant, Anacharis, Java Fern and Java Moss are some of the plants that you can consider when gettings things for the tank.

Tank size is one of the things to consider when taking care of Freshwater Angelfish. Due to their tall feature, a tall tank is recommended for this kind of fish. An Angelfish would require at least a 10-gallon tanks to survive and should be considered if you plan to have a pair or even a school.

You also need to perform regular weekly water changes and other maintenance tasks to keep the water quality in your tank high.

Coming from the Amazon River Basin. Freshwater Angelfish live alongside thousands of different kinds of fishes.

Selecting a compatible tank mate for the would-be quite difficult. If you plan to get tank mates from the Cichlid family, better look for species that are not as aggressive such as a Discus and Dwarf Cichlid.

Mollies and dwarf Gouramis would be a perfect tank mate for these fishes since they are not as aggressive and territorial. Catfish and Plecos are also good choices for tank mates.

Generally, Freshwater Angelfish is an easy species to care off even for beginners. One thing to make sure though is that they need clean water to live in since they are known carriers of parasitic nematodes.

Freshwater Angelfish tend to eat the larvae which are found in dirty tanks. The eggs eventually grow as worms and will get nutrition from the host making it weak over time.

What Do Angelfish Eat?

Freshwater Angelfish are not picky eater since they are omnivores. They require a diet high in protein. Fish Pellets found at local pet stores are also one option for food. I suggest looking for sinking pellets to prevent bloat.

Tubifex worms are a good food source for these fish in the tank. Water Fleas and Brine Shrimp can also be given especially during breeding.

A big feeder, Freshwater Angelfish needs to be fed twice a day. Breeding pairs a fed more during these times.

Angelfish typically enjoy a variety of live foods including bloodworms, brine shrimp, white worms and other small insects and crustaceans.

Freshwater Angelfish are very easy to breed. They will naturally pair off from a school of Angelfish to set their territory and mate.

It is best to transfer them to a different tank once they are paired off. A 20-gallon tank would work best for breeding. I suggest having them in a bare tank to prepare them for the breeding stage.

During this stage, feeding them live tubifex worms would work wonders. 2-3 weeks of feeding high protein meals will make these fishes ready for spawning.

Freshwater Angelfish are egg layers like most Cichlids. Placing a horizontal slate, I use Terracotta slate to see the eggs, and a simple aerator would be needed to prepare for breeding.

With their exotic beauty, it’s easy to see why the ‘King of the Aquarium’ is so well-loved.

They will shine in a tropical community tank just as well as they will stand out on their own. With a wide range of colors and varieties to choose from.

If you are thinking of keeping a few of these beauties, it helps if you already have experience keeping tropical freshwater fish.